You can buy the Coffee Table Art book on AMAZON HERE %27Click+the+Share+button+to+create+links+to+this+email+on+popular+social+networking+and+bookmarking+size+like+Facebook%2C+Twitter%2C+and+Digg.%27+
Posted by Unknown at 4:05 PM No comments: 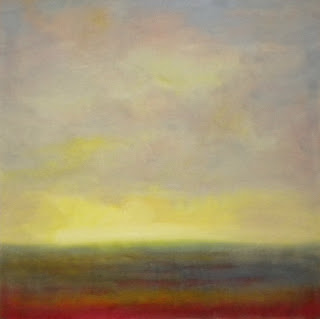 A recent piece that signifies the calm each morning that I see across the cane fields.
The rows of cane take on different colors as the light moves across them. They do not often appear their deep green as they do in midday, but move into a warmer and more subtle palette of color.
Posted by Unknown at 10:36 AM 1 comment:

A Book in the Works 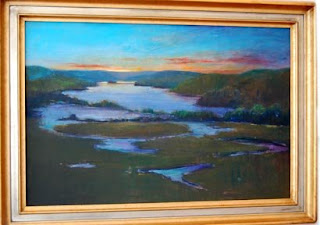 Landscape artists from all over the world share a common bond - the desire to protect our sacred ground. A new book is in the works. More on this to follow.


Hudson River View From the Historic Site at Boscobel
Night on Boscobel
24" x 36" Pastel on Board
Linda Richichi
Posted by Linda Richichi at 10:56 AM No comments:

Out of Storage into View 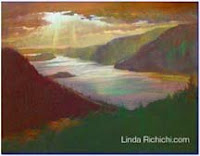 A few of the members of The World Tour of Contemporary Artists will be featured in a special showing at the new SUNY Orange Newburgh Campus for a limited time. The new campus gallery is located on the first floor of the Tower Building on the corner of Broadway and Colden Street. Founder and Director Linda Richichi felt that rather than keep the works in storage while they were between venues, those works that were in her possession could be available to be on view again in Newburgh. If you missed the inaugual opening at Karpeles in June 2007, here's your chance to get a partial glimpse. Mindy Ross welcomed the group where Richichi teaches art as an adjunct. Richichi said "I thought it would be a wonderful opportunity for my students who are learning about landscape painting to see the various styles from artists who live around the world." The exhibit is open during class hours.

Beginning March 3oth through June 3rd, five members work will be on display. They include Dan Gray from British Columbia, Sandra Nunes from Brazil, Vitali Komorov from the Czech Republic , Garin Baker and Linda Richichi both from Newburgh area in NY.
New venues for 2010 are being considered at this time. The tour is still aiming to move overseas. Sponsors are needed to assist in covering the expense of shipping the works. In the meantime, the artists are busy creating new works for the next leg of the tour and a book is in the works that will feature the artists and the sacred and special places they choose to capture on canvas.

Our exhibit is now hung at the new venue on Vancouver Island:

Here are some photos from the gallery to show what a great exhibit this will be. Thanks to Dan Gray, our artist host in BC, for all his hard work! - Michael Chesley Johnson

See us in Colorado!

You can see us now in Estes Park, Colorado!

Our show in Colorado, hosted by The Cultural Arts Council of Estes Park, opened to rave reviews. The Estes Park News wrote about us in the May 30th issue; you can click on the thumbnails below to read about the show.


The show continues through July 6. For more on the show, please visit http://www.estesarts.com/WorldTour/index.asp. The Arts Council is at 423 W. Elkhorn Ave, Estes Park, Colorado.
Posted by Michael Chesley Johnson, Artist / Writer at 6:26 AM 1 comment:

Look for Us in The Artist's Magazine!

The latest issue of The Artist's Magazine (June 2008, page 20, "The Artist's Life" column) has a full page on the World Tour. Here's a scan of the page. You can click on the image for a larger version.

Posted by Michael Chesley Johnson, Artist / Writer at 3:46 AM No comments:

Our first exhibition for 2008 runs April 21-May 21 at the Link Gallery. Artist host and participant Aaron Holland, who helped organize the exhibition, reports.

The reception for the Contemporary Landscape Artists was held Saturday April 26th, 2008 (1-3 pm) at the Link Gallery in Fish Creek. The weather was a blustery 42 degrees, with wind and clouds and chance of flurries. Welcome to Wisconsin!

However formidable the weather, the visitors were consistently arriving for the entire reception. The visitors were very much interested in seeing the artwork, and not just to mingle and hover near the refreshment bar! They were interested in seeing what landscape artists were doing from different parts of the country and (indeed) from different parts of the world. I was a little surprised to see that many people commented on the unique aspect of the show - being that there were so many artists from different parts of the globe - and I discovered that actually the most interesting subjects to them were the ones that were the most different from what they were familiar with. Door County is known as a tourist destination, and the majority of work sold here is typically reminders and scenes of the region. However, for this particular show - the more eclectic the better!

As a world tour, its cohesiveness was actually due in large part not from being similar but from being different. People were genuinely interested in seeing that every artist involved was from a different part of the world. In many cases the styles were very similar, but mountains next to meadows made for an interesting contrast, and El-trains next to fishing boats made one really focus on the fact that these pictures were not painted in the same location. Many people asked, Where are they from? And I would say that almost each artist was from a different state ... this person is from New York, and this one is from South Carolina, and this one is from Florida, and she is from Colorado - oh, and this artist is from Brazil (pause for effect) and he is from Czechoslovakia, etc.... You get the idea.

Thank you everyone who sent work! - Aaron Holland (www.hollandartstudio.com)

Although this is the first exhibit of 2008, it is the final exhibition for the original slate of Signature and Charter Members from LAI and IPAP. The 2008/2010 tour, with additional artists, will begin in Colorado, June 1 - July 6, at The Cultural Arts Council of Estes Park Art Fine Art Gallery.
Posted by Michael Chesley Johnson, Artist / Writer at 2:10 PM No comments:

New Participants for the Tour

We'd like to welcome the new participants on the "Far & Near Horizons" World Tour of Contemporary Landscape Artists. They will join us for the 2008/2010 tour, starting with the show in Estes Park, Colorado, at the The Cultural Arts Council of Estes Park Art Fine Art Gallery, June 1-July 6.

Look for us in American Artist!

For your enjoyment, here is a preview of the page. (Click on the image for a PDF version.)

Look for us in Southwest Art!

Look for the "Far & Near Horizons" World Tour of Contemporary Landscape Artists advertisement in the April, May and June issues of Southwest Art. Creating and placing this ad is a milestone as we move toward our first show of 2008 in Door County, Wisconsin in April.

For your enjoyment, here is a preview of the ad:

CALL for LANDSCAPE ARTISTS WORLDWIDE
Please see all info at
http://www.l-a-i.com/World_Tour/TourProspectus.pdf
Only 12 artists will be juried to fill the tour to 30 artists for the 2008-2009 TOUR
Listen to an audio interview explaining the
World Tour of Contemporary Landscape Artists
VISIT HERE
Posted by ADMIN at 11:35 AM No comments:

Call for Artists - Join Us on the World Tour!

Far and Near Horizons: The World Tour of Contemporary Landscape Artists is now calling for artists for the 2008/2010 Tour. Join us in this not-to-be-missed event!

Any member of Landscape Artists International or International Plein Air Painters is eligible to apply. (If you're not a member already, check out the websites and sign up.)

For a prospectus and application for the Tour, please visit this link. Participation is extremely limited. Only 12 artists will be selected from among the applicants. Deadline is 28 January 2008.

For more about the Tour itself, please visit http://landscapeartistsinternational.com/World_Tour/

Greetings! As North American Director for the Tour, allow me to introduce myself. I'm Michael Chesley Johnson, an artist and workshop instructor living in the Canadian Maritimes. I'm proud to be a part of the "Far and Near Horizons" World Tour, sponsored by Landscape Artists International and International Plein Air Painters. In case you're not familiar with the Tour, let me copy from the website:

From these 30 artists, you'll see dozens of beautiful landscapes from around the world, reflecting the many locales, styles, and mediums of the participants. There is something for every lover of fine art, from precisely rendered realism to classical and contemporary impressionism, and on into boldly expressionistic work. Both organizations recognize the validity and value of the unique creative spirit behind each member's work. If you find a piece that you fall in love with, arrangements can be made for purchase from the artist, either on site at a show venue or through the contact information on this web site.

We truly believe that this tour is an idea whose time has come, and one that will grow in stature and reach with each passing year.

In this blog, we'll give you updates on participating artists, sponsors and show schedules. Stay tuned! I hope you'll visit one of the galleries showing our works.